The Risso’s dolphin is a very mysterious species to scientists, as they don’t have much data on it.  To make matters worse, the Risso’s dolphin are very widely distributed, as different variations of the species live in different environments.  To try to collect more data on this mysterious species, two tools have been created, DolFin and SPIR (Smart Photo Identification of the Risso’s dolphin).  These tools allow scientists to collect lots of data across vast areas for analysis. The sample area discussed in this article is the Northern Ionian Sea and the North-Eastern Central Mediterranean Sea.

The Risso’s dolphin (Grampus griseus) is a species whose populations are spread out around temperate areas throughout the world.  This species of dolphin is the least-known Cetacean species in the Mediterranean Sea. No information on the Risso’s dolphin in the North-Eastern Central Mediterranean is present, as there was only one recorded sighting.  Risso’s dolphins usually have life-long natural marks, making them distinguishable among other dolphins. This is one aspect that scientists are looking to take advantage of for research.

A new digital plan called DolFin looks to collect data on the distribution of Risso’s dolphins in an area, site-fidelity (returning to the same breeding ground year-after-year), and social behaviors and association.  DolFin uses images and sighting data of the Risso’s dolphins, which were geo-referred to keep track of location. A catalogue of a few dolphins were built using photo-ID, since each individual dolphin has distinguishing natural marks.  An add-on to the DolFin tool to identify these individual dolphins brings us to our next major tool, SPIR.

The DolFin platform works through a four-module system.  These modules include web interface, SPIR, statistics, and a database.  What happens is that a query is made (e.g. pictures of a Risso’s dolphin).  This query requests data from the statistics module and SPIR module. The SPIR module will identify the dolphin using photo-ID by grabbing it from the database.  The statistics/reports pulls the matching report for this dolphin from the database. This output is then reflected back to the user through the web interface. It can be outlined by the picture below:

The research conducted in the sample area took place from 2013 to 2016.  215 Risso’s dolphins were observed, and photos were collected that consisted of 11 sightings.  The fin pictures of 60 different Risso’s dolphins were collected. Pictures for both fins of a Risso’s dolphin were only collected for 5 individuals.  SPIR technology was used for identification. It compared features like certain specific details of the fins of these dolphins, while also compensating for different pictures, as some areas of the fin could’ve been partially covered with water, and others over-exposed.  Here is an example of a SPIR test-query. 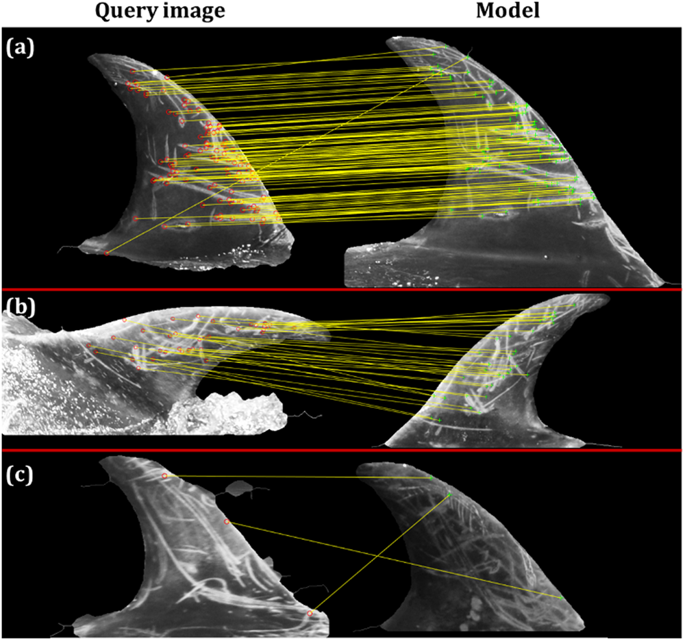 The big innovational idea out of this result was the development of the two big identification applications, DolFin and SPIR.  These types of research could help scientists gather data on other less-known marine animals that are rarely seen. The applications used for this problem can be applied in many other areas of marine science for advancing important research on marine life.