Oceanic islands are islands that rise to the surface from under the oceans. These islands contain a variety of small habitats consisting of a variety of species that are grouped closely together and grown in genetic isolation. As a result, these islands are commonly classified as natural laboratories for studying evolution and speciation. They provide unique scenarios to study the role of geography and climate in driving population divergence of genetically isolated animals. The study described in this article looks at Coffea mauritiana plants on an island named Reunion Island which is located in the southern Indian ocean and is classified as an oceanic island. This island consists of an abundance of Coffea mauritiana plants that are distributed as small patches throughout the different regions.

In this experiment, scientists aimed to examine patterns of genetic diversity and population divergences in Coffea mauritiana populations within this small island. They wanted to looking specifically at the role of climate and geographic distance. Furthermore, they intended to analyze genetic connectivity between these plants from Reunion Island and other Mauritian coffee species in detail.

Since Coffea mauritiana plants were widely distributed around Reunion Island, scientists had to organize “collecting missions”. They covered the environmental range of habitats and the geographic distribution of the species by going around the island and collecting samples from 323 plants in 34 different source populations. To look at climate’s influence on these plants, scientists obtained daily climatic data from meteorological stations set up at all 34 locations. This data consisted of precipitation, temperature, potential evapotranspiration, and incident radiation in the locations.

The Coffea mauritiana leaves were used to extract DNA which was sent to Diverse Array Technology (technology used to develop sequence markers for genotyping) for analysis and genotyping. Furthermore, to assess genetic diversity structure and ancestry, scientists constructed phylogenetic trees that compared Coffea mauritiana plants to other species that were mainly Mauritian. Using the tree, they computed the genetic distance between each species. Finally, scientists conducted a distance-based redundancy analysis to estimate the relative contribution of IBE(isolation-by-environment) and IBD(isolation-by-distance) to the differentiation of C. mauritiana source populations. IBE relates further to the effects of environmental factors and IBD relates to geographic factors.

The results from the genetic distance computation were used to form a neighbor-joining tree(diagram which indicates the distance between each species based on DNA). In this tree diagram, similar plants were shown clustered together while unlike species were separated by a distance. The tree showed that individuals belonging to the same source population were clustered together. Source populations that were geographically close also tended to cluster together, which indicated genetic proximity according to geographic distribution. This mostly happened within the western and southern regions of the island as well as the central and north-western regions. The individuals in the north-western region cluster indicated the highest population divergence. 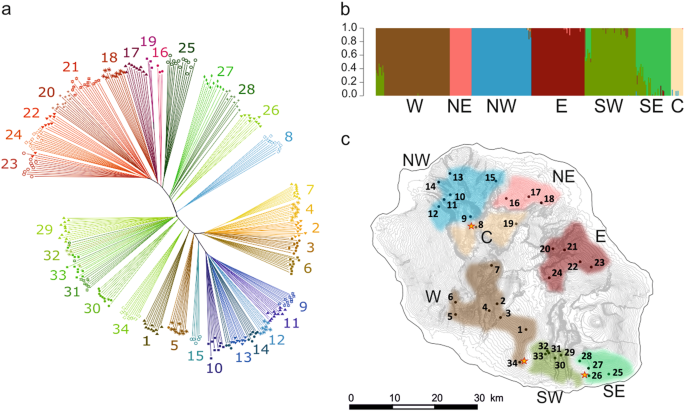 (The image on the left is showing the neighbor-joining tree constructed by scientists. The picture on the right shows the different locations from which the source populations were taken)

Additionally, scientists found that populations in the east and west regions breed the most with each other to form new species while the north-western, eastern, and southern region plants breed the least. From the results of the phylogenetic trees constructed, scientists were able to see the relationships between the Coffea mauritiana plants and the other Mauritian individuals. The Mauritian species Coffea myrtifolia appeared to be the most divergent while the Coffea macrocarpa and Coffea bernardiniana species were more closely related. Lastly, the meteorological stations revealed the possible chance of the genetic variation in the Coffea mauritiana species being related to the strong correlation between the geographic position and the rainfall regime in Reunion Island.

From the results of this experiment, scientists were able to identify the specific geographic and environmental factors that influence patterns of genetic diversity/differentiation and population divergence in Coffea mauritiana plants on Reunion Island. They found that together, geographic distance and rainfall regimes, have the major impact. The fact that these plants grew and were able to survive in such different environmental conditions reveals their local adaptations. Furthermore, the results of genetic relationships between different species reveals ancestral connections regardless of which island/part of an island they grew on. All this information educates environmental scientists with all the information they need for future experiments on Coffea mauritiana plants and can be used to guide forest management for the conservation of these plants.