It was known that the radiation belts of Saturn were caused by free-moving electrons that were trapped in Saturn’s magnetic field, and then accelerated to create high energy.  However, scientists didn’t know what caused this sudden acceleration. Recent analysis of data from the Cassini spacecraft has finally answered this question. This acceleration is caused by Z-Mode.

Z-Mode is a plasma wave that accelerates electrons to massive amounts of energy (measured through MeV [Mega electron-volts]).  This takes place 4 R_S (unit of distance equivalent to 60,300 km) away from the surface of Saturn.

Radiation Belts aren’t specific to Saturn, they appear in most planets (including Earth).  They are formed when electrons and protons get trapped in the magnetic fields of planets, and then get accelerated to high amounts of energy.  For a long time, it was thought that radial diffusion was the driving force of this acceleration of protons and electrons. Wave particles were found to transfer energy between these protons and electrons and plasma waves.  Waves can diffuse these electrons, which changes the velocity vector in relation to the magnetic field of the planet, accelerating it due to its proximity and trajectory.

Z-Mode waves were first investigated on the suspicion that they caused this rapid acceleration, as the high amounts of energy and acceleration of the particles within 4 R_S of the planet was related to the high presence of these Z-Mode waves.

There are other plasma waves called O-Mode waves.  They are contrasted with Z-Mode waves, as they (along with radial diffusion) were thought to be a driving force of this particle acceleration.  However, scientists have found out that there isn’t a great presence of O-Mode waves, and that they are too weak to cause this acceleration.

Saturn is the perfect ground to investigate Z-Mode waves, as its moon Enceladus is a source of plasma waves.

To prove this claim that it is indeed Z-Mode waves, not O-Mode waves,  that cause the acceleration of electrons and protons, the diffusion coefficients were calculated for both types of waves.  These coefficients relate to the diffusion of electrons based off the types of waves that are in use. These coefficients were calculated using data from the Cassini spacecraft.  In the graph below, lighter colors amount to higher amounts of energy (measured in MeV). 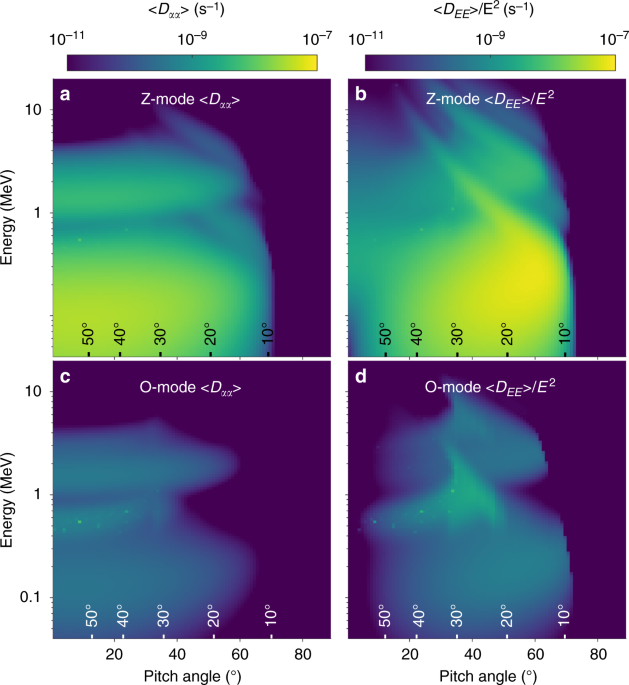