This blog post is a part of STEMTalksNC’s ever-expanding General Biology Series.  In this post, I’ll be talking about population evolution!

Each organism’s traits affect its survival and reproductive success compared with those of other individuals. But the evolutionary impact of natural selection is only apparent in how a population of organisms changes over time. With this in mind, we can define Micro-Evolution as a change in allele frequencies in a population over generations. The three mechanisms for this change are natural selection, genetic drift, and gene flow. However, for these 3 processes to work, you need genetic variation.

Each individual has a unique genotype, which is then reflected in phenotypic variations such as skin color, height, and weight. However, a phenotype is not the product of just the genotype. The phenotype is the product of an inherited genotype and many environmental influences. The only part of variation that has evolutionary consequence is the genetic part of the variation.

The ultimate source of new alleles is a mutation, a change in the nucleotide sequence of an organism’s DNA. Only mutations in cell lines that produce gametes can be passed to offspring. Point mutations can have a significant impact on phenotype. However, this is unlikely in eukaryotes. This is due to the fact that much of the DNA is non-coding. And if this mutation does occur in the coding section of DNA, the only way the gene that encodes a protein will have any effect on the protein’s function is if the amino acid composition is changed. However, chromosomal changes that disrupt, delete or rearrange many loci at once are almost certain to be harmful. However, the translocation of part of one chromosome to a different organism could link DNA segments in a way that results positively. An important source of variation happens when genes are duplicated due to errors in meiosis or slippage during DNA replication. These gene duplications that do not have severe effects can stay over generations, allowing mutations to accumulate. The result could be an expanded genome that has a new locus, which takes on a new function.

Mutation rates tend to be low in plants and animals and even lower in prokaryotes. However, prokaryotes have short generation spans. This means mutations can quickly generate genetic variation in populations of these organisms. This is true of antibiotic resistance in bacteria.

Most genetic variation in population results from a unique combination of alleles that each individual receives. The three mechanisms that contribute to unique combinations are crossing over, independent assortment, and random fertilization. The combined effects of these three mechanisms ensure that sexual reproduction rearranges existing alleles into fresh combinations each generation, providing much of the genetic variation that makes evolution possible.

The Hardy-Weinberg equation can be used to prove evolution

The presence of genetic variation does not guarantee that a population will evolve. For that to happen, one of the factors that cause evolution must be at work. The Hardy-Weinberg principle allows us to test whether evolution is occurring in a population. However, we need to understand what the population is.

A population is a group of individual’s of the same species that live in the same area and interbreed, producing fertile offspring. You can characterize a population’s genetic makeup by describing its gene pool, which consists of all the alleles for all the loci in all individuals of the population. Each allele (dominant or recessive) has a frequency (proportion) in the population. We usually use “p” to represent the frequency of the dominant allele and we use “q” to represent the frequency of the recessive allele. The two frequencies of the alleles will equal to one (p + q = 1) 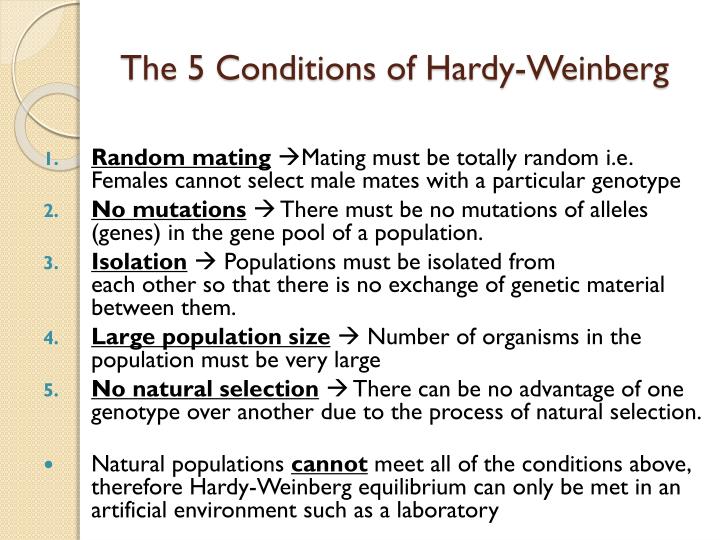 The three mechanisms that alter allele frequencies directly and cause most evolutionary change are natural selection, genetic drift, and gene flow. These three mechanisms deviate from the five conditions of Hardy-Weinberg Theorem.

Natural Selection is based on differential success in survival and reproduction. Natural Selection is when individuals in a population exhibit variations in their heritable traits, and those with traits that are best suited to their environment tend to produce more offspring than those with traits that are less well suited. By consistently favoring some alleles over others, natural selection alters allele frequencies. Natural selection can cause adaptive evolution.

Gene flow is the transfer of alleles into or out of a population due to the movement of fertile individuals. It tends to reduce genetic differences between populations. By allowing new alleles to come into the population, gene flow can alter allele frequencies directly.

In the next post, we will discuss the effects of natural selection and speciation. Feel free to leave any question down below in the comments!

Co-Founder and Editor of StemTalksNC

In all my posts, I follow multiple sources for AP Biology. However, I mainly go off of the Campbell Biology 8th and 11th edition.