Aging brings a progressive decline of balance and mobility. As people age, it is important that they walk efficiently and safely to maintain their independence and reduce their risk of falling, a major cause of injury and death among older adults. This study was conducted to see which external factors have more of an influence on the disruption of internal body functions which are the main causes of loss of balance, disturbances in mobility, and instability. Dr. Jason Franz and his team of scientists at UNC wanted to dig deeper on the topic of antagonist leg muscle coactivation and its relation to aging, cognitive load, and optical flow mainly. Antagonist and agonist muscles are muscles that work together at our joints by doing reverse actions(contracting and relaxing). These muscles are present in our legs with the quadriceps being agonist and the hamstrings being antagonist. Research has proven that these muscles contribute to stiffness in our joints which in turn alleviates some disturbances in mobility that we may experience, mainly at an old age. In addition, this coactivation of muscles is more prevalent in older adults as they age and start to have more muscular complications. 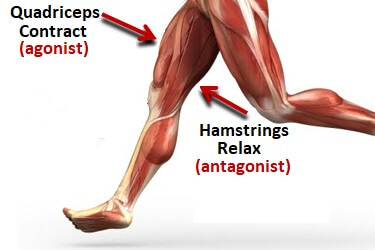 As mentioned before, in this study, Dr. Jason Franz and his team of scientists at UNC wanted to see if cognitive load and optical flow had effects on this muscular coactivation with or without the age factor. Cognitive load refers to the amount of mental effort being used and optical flow refers to an interpretation by the observer of a certain object/point in relation to their motion. To test this, they set up an experiment with 16 older adults and 12 young adults. They put them through several tests prior to ensure that they were free of orthopedic injury and any mental disabilities. The task presented to these participants was walking on a treadmill while viewing a virtual hallway under three different circumstances. The first one was the control group with just normal walking with no external influential factors. The second time, they all walked while counting backwards by sevens from a random 3-digit number to test cognitive load’s influence. The third time, participants walked while the ground of the virtual hallway swayed up and down to create an optical perturbation to test optical flow’s influence.

(Electromyography)
To record the results, electromyogaphy- the use of wires connected to electrodes stuck on skin to record the electrical activity produced by skeletal muscles- was used while they walked. This test was capable of determining increased muscle coactivation because it was able to detect the electric potential generated by the skeletal muscles when activated by neurological signals from the brain. Electrodes were inserted into several muscles including the medial hamstrings, vastus lateralis(attaches femur to patella), medial gastrocnemius(posterior calf muscles), soleus, and the tibialis anterior muscle(anterior calf muscles) of the participants. Then, several measures were taken to ensure that the scientists were able to interpret the data from the electromyogram to the problem they were trying to tackle in the real world.

Overall, the statistical data showed that older adults had a significantly greater mean stride antagonist coactivation in the medial hamstrings and vastus lateralis muscles than younger adults in the control environment. In addition, they were able to prove that balance is interrupted more in environments that challenge optical flow than in environments that challenge cognitive load as the results showed that lower limb muscles coactivation was much greater in both older and younger adults while they stared at the moving ground of the virtual hallway. The environment with greater cognitive load also had higher rates of muscle coactivation that the control group just not as much as the optical flow one. In addition, both younger and older adults had the same amount of muscle coactivation in cognitive load challenging environments, regardless of age. All in all, they proved that external factors influence internal factors which play a big role in mobility disturbances and falls in adults while walking.
-Smaran Sivashankar
Sources: https://www.sciencedirect.com/science/article/pii/S1050641118303122?via%3Dihub